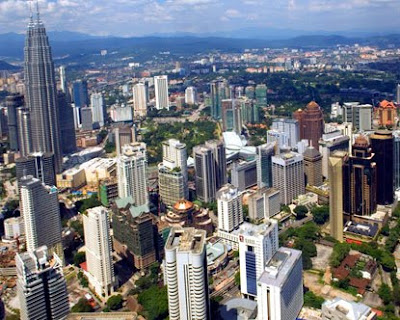 Bonds, home mortgages, and other financial assets that comply with Islamic law, which prohibits the charging or paying of interest, have gained in popularity throughout the Muslim world. A lot of high-paying jobs and national prestige are up for grabs for the country that can position itself as the hub of global Islamic finance. Persian Gulf states such as Saudi Arabia, the United Arab Emirates, Qatar, and Bahrain have sought to build out their financial-service sectors to accommodate the expanding demand. However, the real action these days isn't taking place in the Gulf but in Asia—especially in Malaysia's capital city of Kuala Lumpur.
Islamic bonds, or sukuk, pay holders a share of the issuer's profits rather than interest. For instance, a sukuk holder might have a claim to a portion of toll revenues from a highway project. This year, international borrowers have sold $9.8 billion of Islamic bonds, with 72 percent of that being issued in Malaysia, according to data compiled by Bloomberg.
In the Gulf, $2.5 billion of sukuk have been issued so far this year. That's down 24 percent from the comparable period last year and is the slowest pace since 2005. The real estate bust in Dubai and last year's default of sukukissued by Saad Group, a Saudi Arabian conglomerate, and Kuwait's Investment Dar, an investing firm that owns half of British carmaker Aston Martin, have made investors a lot more cautious. They now demand a risk premium on sukukissued by regional borrowers. "The increased risk aversion and wider spreads have made it a relatively expensive time to borrow in the Gulf Arab region," says Khalid Howladar, a Dubai-based senior analyst at credit rating agency Moody's Investors Service.
Worldwide, assets that comply with shariah (Islamic law), including deposits at Islamic financial institutions, were pegged at $950billion by Moody's and could grow to $1.6trillion by 2012, according to the Kuala Lumpur-based Islamic Financial Services Board and Jeddah-based Islamic Development Bank. To get a piece of that growth, Gulf and Asian governments have launched state-owned Islamic banks. Big global lenders such as HSBC Holdings, Citigroup, and Singapore's DBS are also chasing this business via sukuk, shariah-approved home mortgages, and exchange-traded funds, among other products.
Both Malaysia, where more than 60percent of its 28million people are Muslims, and Indonesia, home to at least 192 million Muslims, have pushed hard to expand their Islamic finance sectors and attract foreign financial firms. Malaysia seems to have the edge at the moment. Saturna Capital, the biggest shariah-compliant equity fund manager in the U.S., set up a unit in Kuala Lumpur, as did Japan's Nomura Securities and India's Reliance Capital Asset Management. Malaysia last year introduced an online trading platform for murabahah transactions, in which banks and companies buy and sell commodities based on a price that includes an agreed-upon profit margin that complies with shariah principles.
These moves have helped Malaysia make big strides in developing a highly liquid and deep bond market that's more attractive to governments and companies interested in raising money than rival Gulf financial centers. "Until some of the Gulf countries can replicate what Malaysia has done in terms of the success of the domestic bond market, I think you'll continue to see volumes of sukuk in Asia significantly higher than in the Middle East," says Mohammed Dawood, director of debt capital markets at HSBC.
The bottom line: Kuala Lumpur has trumped Gulf financial centers and now dominates the global market for Islamic bonds.
(Bloomberg News)