Unit trust strong growth in Malaysia is expected to continue 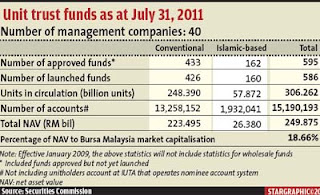 The unit trust industry is expected to continue its growth momentum into the second half of this year, albeit at a slower rate, due to global economic uncertainties arising from the unfavourable US economic outlook and sovereign debt crisis in Europe.
Fund managers, nevertheless, said they expected a strong single-digit growth supported by demand in less riskier funds like fixed income, dividend and money market funds.
According to data from the Federation of Investment Managers Malaysia (FIMM), the private fund industry in terms of assets under management grew by RM48.4bil or 95% from 2006 to 2010 despite the 2008 global financial crisis.
In 2008, asset size declined by 22% due to the global crisis and rebounded by 47% by end-2009 and this growth continued into 2010 with a growth rate of 18%.

The asset size of the unit trust industry had been on an upward growth trend since 2004. Between end-2004 and end-2007, growth had been at 12%, 23% and 39% per annum respectively.
HwangDBS Investment Management Bhd chief investment officer David Ng told StarBiz that given the softer unit trust industry outlook this year, he expected growth would likely moderate but could still safely achieve a high single-digit growth.
He said the company's unit trust fund assets grew 26% year-on-year, adding that this year's unit trust assets had largely been driven by its income and dividend-type products due to its relative stability and evergreen nature.
“It is likely that aggressive-type equity funds will take the brunt of the softer outlook, but less volatile income-generating assets such as good quality fixed income and dividend-type funds should see more inflow as money will eventually need to find a home'.
“Due to the uncertain outlook, we expect risk appetite to remain low. As such, high quality dividend yielding funds and fixed income funds will continue to be in demand,” he noted.
Such funds, Ng said, would tend to outperform in such market conditions due to its general defensive and less volatile nature and tend to be more popular among investors.
Pacific Mutual Fund Bhd acting CEO Gary Gan said although investor sentiment had clearly shifted towards the less risky funds, like income-type and money market, nonetheless there have not been mass panic or mass redemptions from retail investors.
(The star, M'sia: 31 Aug 2011)
-------------------
Consulting/Training: http://alfalahconsulting.com
CEO/Consultant: http://ahmad-sanusi-husain.com
Islamic Investment: http://islamic-invest-malaysia.com
Posted by Editor at 1:03 PM