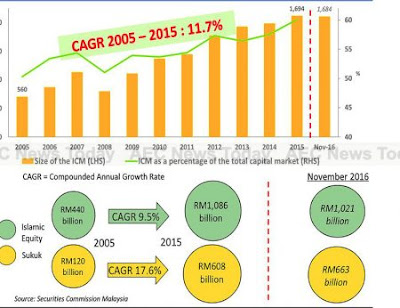 With Islamic assets under management of some Rm132.4 billion (US$29.66 billion), Malaysia is well on its way towards establishing itself as the international centre of Islamic wealth management services.
The country’s aim of cementing its position as the Islamic wealth management capital of the world received a boost recently with the launch of a five-year Islamic Fund and Wealth Management Blueprint.
Unveiled by second finance minister Johari Abdul Ghani, the 51-page document focuses on three areas towards solidifying Malaysia as the centre of Islamic wealth management services globally. Specifically it will:
Mr Johari said that the recommendations are made to “provide flexibility within the overall target of the blueprint” to enable suitable adjustments, adding that “a tremendous amount of work is, however, required to ensure that the Blueprint strategies are appropriately put into place”.
Addressing the Securities Commission Malaysia (SC) International Fund Forum 2017, Mr Ghani said that with its comprehensive Islamic finance ecosystem and track record in innovation, Malaysia was in an “advantageous position to play a lead role in shaping the concept and driving the development of Islamic wealth management services”.
The blueprint will be implemented over a period of five years and is drawn up with the aim of developing and growing Malaysia’s Islamic capital market.
The first phase will focus on the formulation of a framework for issuance of SRI investment funds, the setting up of the global capacity building centre for Islamic Capital Market (ICM), and the establishment of digital investment services framework.

Malaysia’s interest in the rapidly growing Muslim middle-class, particularly in Asean where Muslims represent 42 per cent of the Asean Community’s (ACs) population is not without reason.
Speaking at the 12th World Islamic Economic Forum (WIEF) in Jakarta last year, Malaysia Prime Minister Najib Razak said that in 2014-2015 the Islamic economy grew at almost double the global GDP growth rate, while Muslim consumer spending is forecast to reach $2.6 trillion by 2020 (See: Cambodia Aims For Share of Halal Market).
The Islamic market in Malaysia is estimated to have been worth some $1.9 billion in 2013, with officials forecasting it to contribute about 5.8 per cent to Malaysia GDP by 2020.
Malaysia is not the only nation hoping to capture a larger slice of the burgeoning Muslim middle-class. While Malaysia seeks to be the centre of Islamic wealth management services, Cambodia hopes that the introduction of a formal halal certification process for restaurants and food producers will attract more Muslim tourists to the Kingdom and also strengthen the growth of the Kingdom’s nascent halal certified food sector.
Meanwhile, in Indonesia where the Islamic market is valued at more than $10 billion annually and growing at between 7-10 per cent,  the Islamic Development Bank (IDB) announced that to date it had approved $4.2 billion to support development projects.
The Bank said money had been dispersed in the areas of education, health, transportation, communication, industries, mining, power generation, agriculture, water supplies, and Islamic banking, as well as financing numerous foreign trade operations between Indonesia and other IDB member countries.
Source: AECNews/22 January 2017
---
Islamic Investment Malaysia: www.islamic-invest-malaysia.com